FROM TEMPORARY TO PERMANENT INSTALLATION

Motorists and cyclists drive in along the same road in the morning. It creates insecurity for the school’s cyclists, when they are going to school and in addition must cross the roadway to get to the bicycle racks.

A group of students was involved in the process to develop a solution to the problem in three workshops. The students suggested that a two-way cycle path was to be established on the road to the school, so that the students was not to cross the roadway to get to the bicycle sheds.

The idea of ​​a cycle path on the road to the school was tested for a period of six weeks when a temporary barrier was established on the roadway to separate bicycles and cars. The cycle path was inaugurated with a campaign that the students had developed themselves. 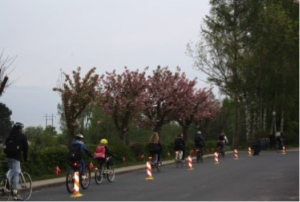 The cycle path was to test whether the pathway into the school became more comfortable for the school’s cyclists, now that the cars could no longer park along the road and the cyclists should not cross the roadway to get to the bicycle racks.

After a trial period of six weeks, traffic counts showed that 56% more students cycled to school. Based on this, the City of Odense, decided to make the cycle path permanent. The price was approx. 30,000 euros.

The bike path that the school had been working on for years would have a price of approx. 100,000 euros. In this case the involvement of the students saved the municipality for approx. 70,000 euros. 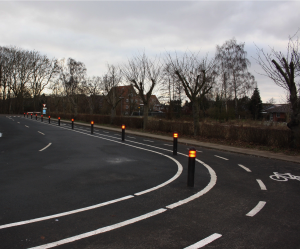