Traffic teacher, Rikke Therkelsen, says:
‘I’ve never seen so many students walk and bike to school for the 10 years, I’ve been a teacher at school’.

TRAFFIC PROBLEM
For several years, the school has had the problem that many parents put their children off right in front of the school. Students on bike are going through the same blind way and they feel insecure in the tight space.
Gadstrup School is a village school where the majority of school students live in a bicycle or walking distance to school. Still, there were many students who were driven to school by their parents.
STUDENTS’ IDEA: ‘THE DREAM PATH’ – A NEW ROAD TO SCHOOL
A student asked why there was no one who cycled on the path behind the school instead.
It was the starting point for developing the ‘Dream path’. 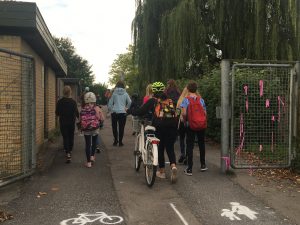 The trail was divided, so you are cycling on one side and walking in the other. This makes it more safe for students to go by bike or walk to school.

FROM PASSIVE PASSENGERS TO ACTIVE CYCLIST AND PEDESTRIANS

It is clear that the students know the area very well and they were therefore quick to find solutions for how to get more students to go by bike and walk to school. The school yard on the other side of the school was transformed into a ‘dream path’, where it is both safe and fun to get to school. The distance is longer but safer. The advantage of involving students in traffic projects is that they know the area around the school because they go there every day. At the same time, they are good ambassadors for a behavioural change, as the school’s other students and parents listen to them.

The project with the students has been carried out in parallel with the fact that the City of Roskilde plans the physical infrastructure around the school. The goal is that the new behaviour must be supported by the physical infrastructure. In addition to the ‘Dream Path’ itself, the students have developed a number of activities to support the new transport behaviour: